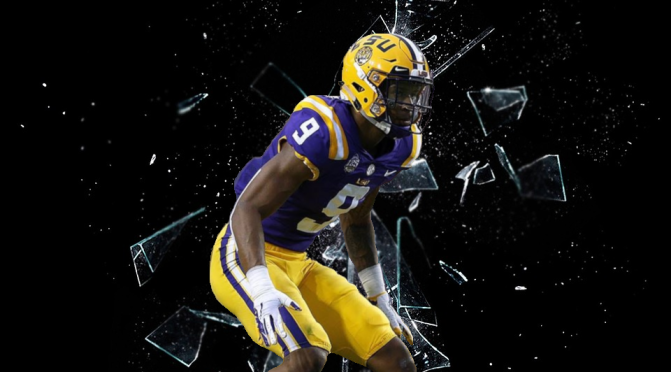 Since the late 2000s, LSU has built an indomitable reputation as college football’s true “DBU.” When you look at its track record of producing NFL-quality defensive backs over the past dozen years, no other school can really compare. Patrick Peterson, LaRon Landry, Tyrann Mathieu, Jamal Adams, Morris Claiborne, Tre’Davious White, Eric Reid, Donte Jackson and Greedy Williams all came out of Baton Rouge as early-round draft picks and many of them have gone on to star in the NFL. In spring 2020, LSU will look to continue the long-standing tradition with two more potential first-rounders: safety Grant Delpit and cornerback Kristian Fulton.

Delpit, a unanimous 2018 All-American and First Team All-SEC selection, enters the 2019 college football season as an elite prospect and potential top-10 pick in the 2020 NFL Draft.

The former four-star recruit out of IMG Academy was an immediate difference-maker for the Tigers as a true freshman two years ago, and he really came into his own as a sophomore last season.

When I sat down to study Delpit’s 2018 film this summer, I quickly realized that I was watching a unique and rare talent. If you were to create the perfect modern NFL safety in a laboratory, he would probably end up looking a lot like the LSU football star.

Delpit is bigger than the average player at his position at a listed 6-foot-3, 203 pounds, but he moves extremely well for his size. Athletically, he’s got everything you want in a safety: good straight-line speed, quickness and agility. He can stay hip to hip with most wide receivers down the field and he breaks on the football in a hurry from off coverage. In high school, Delpit was clocked at 4.52 seconds in the 40-yard dash. As a (now) 20-year-old junior with two years in the LSU strength and conditioning program, it’s possible that he’s gotten even faster.

Grant Delpit #LSU All American Safety putting in work with the best around @footwork_king1.

Delpit is projected as a high 1st Round Draft Pick in 2020…
pic.twitter.com/e1ZpzW8ip2

Delpit’s incredible combination of athleticism, instincts and football intelligence allow him to thrive in a myriad of roles. In Dave Aranda’s defense, he has played and excelled at several different positions. He’s played strong and free safety in single-high and split-safety looks, slot cornerback, outside linebacker and edge rusher. He’s also gotten some work on special teams.

As a deep safety, Delpit can cover ground from sideline-to-sideline like a Major League Baseball center fielder. His rare combination of instincts and range allow him to thrive as a single-high safety in Cover 1 looks.

He can close on a throwing window or ball-carrier quickly, and he’s not afraid to deliver a hit when the situation calls for it.

Having a player with Delpit’s versatility is incredibly valuable, especially in the modern NFL. When you have a player who can handle so many different roles at a high level, it’s easier to disguise coverages and you don’t need to substitute personnel as often because they can negate mismatches by simply switching assignments.

Delpit’s instincts and play recognition were excellent for a player of any experience level in 2018, let alone a second-year true sophomore starter.

On multiple occasions last year, the LSU safety was able to figure out where the ball was being thrown well before it left the quarterback’s hand. His key-and-diagnose abilities and instinctive feel for the game are truly exceptional.

His ball skills and route recognition from off coverage are extremely impressive, too.

I watched every snap Delpit played in 2018 and only saw him beaten a handful of times through 13 games. He was beaten deep twice on man coverage reps that I can recall: once against Georgia wide receiver Mecole Hardman and once against Alabama tight end Irv Smith.

Against Smith, Delpit simply missed with his jam and wasn’t able to recover in time. Since it was an isolated mistake, I’m not really concerned about it. Against Hardman, he was simply overmatched. Delpit is fast for a safety, but he doesn’t have 4.3 speed to keep pace with Hardman down the field. You could maybe knock him for not getting a hand on Hardman to slow him down during the beginning of the route, but that’s a tough ask for any safety, especially when you’re isolated in one-on-one coverage against a 4.3 receiver with no safety shaded to your side of the field.

Aside from the two aforementioned plays (one of which was excusable), I never really saw Delpit get torched in coverage. I think there was one play in the Arkansas game where he took too many drops steps in zone coverage and allowed a completion of 15-20 yards, but that was really the only other bad coverage play that sticks out in my mind across a 13-game sample size. Delpit was rarely beaten on throws to any level of the field last year, and the only touchdowns he gave up were the one I mentioned earlier to Irv Smith and a 10-yard touchdown to Texas A&M tight end Jace Sternberger.

Whether he’s playing man or zone coverage, the LSU safety is reliable. He does a great job of disrupting the catch point and he makes a lot of plays on the ball. Last year, he had five interceptions and nine pass breakups.

He can cover slot receivers, tight ends or running backs in man-to-man.

Delpit is a solid player in run support. He’s always around the ball because he diagnoses plays so quickly, he’s pretty good at taking on blocks and he’s a solid tackler, too. With his length advantage, Delpit is able to make some impressive tackles away from his frame.

Delpit’s relentless motor, impressive flexibility and superb initial quickness make him a quality blitzer off the edge. Like Derwin James or Jamal Adams, Delpit can be a big asset as a blitzing safety if defensive coordinators are looking to bring some extra heat on passing downs.

Delpit looks like a top-3 player and elite talent in the 2020 NFL Draft class. At this point in time, I believe he is a better pro prospect than Minkah Fitzpatrick, Jamal Adams and Malik Hooker were in their respective draft classes, and I might even rank him ahead of Derwin James when I finalize my pre-draft grades next spring.

My current NFL comparison for Delpit, coincidentally, is Derwin James. I think they are similar players in terms of size, athleticism and versatility. I think James (as a prospect) was a bigger hitter, better tackler and better blitzer, but Delpit has superior ball skills, a better motor and a proven ability to play single-high safety at a high level.

If there’s one thing I’d like to see Delpit improve in 2019, it’s his tackling. While I believe he’s solid in that regard already, I still think he can become a little more consistent as a downhill tackler. Aside from that minor gripe, there’s not much to criticize. Delpit is an excellent player with Hall of Fame potential.