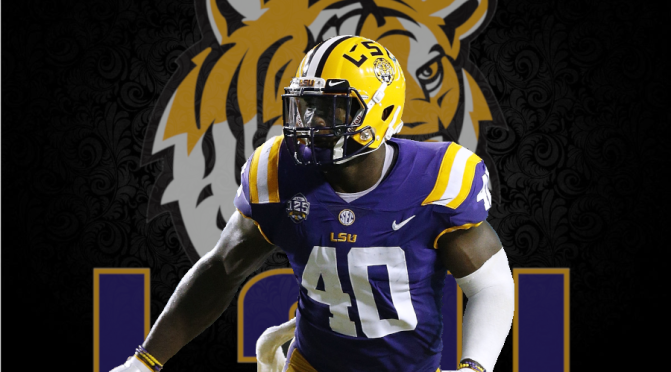 SCHEME FIT: 4-3 Mike or Sam linebacker is ideal; fits at 3-4 inside linebacker and possibly 4-3 Will

“As a converted running back with less than three years of experience playing full-time linebacker, Devin White is still a fairly raw prospect. That being said, all of his flaws appear to be fixable with coaching and experience. White is an excellent athlete with prototypical size, strength and range to handle mike linebacker responsibilities. His sideline-to-sideline range is very good, his instincts and coverage ability are adequate, and his effort is terrific.

His biggest weaknesses are his block-shedding and over-aggressiveness in run support. White is a reliable tackler when he takes good pursuit angles and squares up ball-carriers, but too often he misjudges angles and flies past the intended target. He has a tendency to tackle high, but he almost always gets runners on the ground when he gets a clean wrap on them. He clearly has the strength to hold up at the point of attack as a run defender, but he doesn’t strike blockers with power or disengage from blocks consistently. White has Pro Bowl potential if he can improve his take-on skills, hasten his processing and learn to play with better discipline and control.” — Dan Wussow